Volatility Returns to the Markets In 2022

After a historically calm 2021, volatility returned in the first quarter of 2022, as inflation surged to 40-year highs, the Federal Reserve promised to raise interest rates faster than previously thought, and Russia surprised the world with a full-scale military invasion of Ukraine, marking the first major military conflict in Europe in decades. Those factors fueled a rise in volatility and pushed stocks lower in the first three months of the year.

Broad market volatility began to pick up during the first few days of 2022 as inflation readings hit multi-decade highs, confirming that price pressures were still accelerating. That prompted multiple Federal Reserve officials to signal that interest rates will rise faster than markets had previously thought, including a possible rate hike in March. The prospect of sooner-than-expected interest rate hikes weighed on the sectors with the highest valuations, specifically growth-oriented technology stocks. The steep declines in the tech sector exacerbated market volatility in January. Additionally, while the fourth-quarter earnings season was solid, there were several large, widely held technology companies that posted disappointing results or forecasts, and that also contributed to general market volatility. Finally, in late January at the FOMC meeting, Fed Chair Powell clearly signaled that the Fed would be raising rates at the next meeting (in March) confirming to investors that interest rates were going to rise much more quickly than had been assumed just a few months prior. The S&P 500 ended January with the worst monthly return since March 2020 (the onset of the pandemic).

Volatility remained elevated in February with the market’s primary concern shifting from monetary policy to geopolitics as Russia amassed troops on the Ukrainian border, prompting warnings from the United States and other Western countries of an imminent invasion. The rising threat of a major military conflict in Europe for the first time in decades further weighed on stocks in early February. That additional uncertainty, combined with still-stubbornly high inflation readings and continued warnings from Fed officials about future interest rate increases kept markets volatile throughout most of the month. Then on February 24th, Western warnings of a Russian invasion of Ukraine were fulfilled as Russia invaded in the early morning hours. The conflict sent essential commodity prices such as oil, wheat, corn, and natural gas surging as commodity producers and end users feared production disruptions and reduced supply. As one would expect, markets dropped in response to the invasion, and not just because of rising geopolitical concerns, but also as investors realized higher commodity prices will only add to existing inflation pressures, and in turn, possibly pressure corporate earnings and consumer spending. Geopolitical uncertainty combined with lingering inflation concerns and anxiety over the pace of Fed rate hikes weighed on stocks again in February, and the S&P 500 declined for a second straight month.

Markets remained volatile in early March, as hopes for a relatively quick ceasefire in Ukraine faded and commodity prices stayed elevated. Shortly after Russia’s invasion, the developed world united in a never-before-seen way against Russia, imposing crushing economic sanctions on the Russian economy. But while that demonstrated important unity against Russian aggression, it became clear that the sanctions would also have a negative impact on Western economies, especially in the EU, and that raised concerns about a global economic slowdown. However, stocks did mount a strong rebound in late March thanks to incrementally positive geopolitical and monetary policy news. First, the Ukrainian resistance stalled the Russian advance, and while the situation devolved into an intense humanitarian tragedy in Ukraine, fears of the conflict extending beyond Ukraine’s borders faded over the course of the month. Then, on March 16th, the Federal Reserve raised interest rates by 25 basis points, the first-rate hike in over three years. But the rate hike was no worse than markets feared, and that provided a spark for a “relief rally” in stocks that produced a solidly positive monthly return for the S&P 500 and carried the major indices to multi-week highs by the end of the quarter.

In sum, the first quarter of 2022 was the most volatile quarter for markets since the depths of the pandemic in 2020, as numerous threats to economic growth emerged. As we start the second quarter, investors will need to see incrementally positive progress across geopolitics, monetary policy expectations, and the outlook for inflation if the late-March rally is to continue.

All four major equity indices posted negative returns for the first quarter of 2022, although the S&P 500 and the Dow Industrials saw only mild losses compared to the Nasdaq and Russell 2000. Investors rotated out of growth-oriented, high-P/E technology stocks and into sectors that were more exposed to the traditional economy which, generally speaking, trade at a cheaper valuation relative to the tech sector. That rotation benefitted the Dow Jones Industrial Average primarily while the Nasdaq Composite badly lagged both the S&P 500 and the Dow.

On a sector level, only two of the eleven sectors in the S&P 500 finished the first quarter with a positive return. Energy was the clear standout as the sector benefitted from the increase in geopolitical uncertainty and subsequent surge in oil and natural gas prices in response to the Russia-Ukraine war. Utilities, a traditionally defensive sector, logged a modestly positive return as investors rotated to defensive sectors in response to elevated market volatility and geopolitical uncertainty. Finally, financials relatively outperformed the S&P 500 and saw only a small loss as the sector has historically benefited from rising interest rates, although concerns about exposure to the Russian economy weighed on many financial stocks in February and early March.

Sector laggards included the communication services, tech, and consumer discretionary sectors as they saw material declines in the first quarter thanks primarily to the broad rotation away from the more highly valued corners of the market. Specifically, internet stocks weighed on the communications sector, while online retail stocks were a drag on the consumer discretionary sector. Away from tech and tech-related sectors, most other sectors in the S&P 500 saw modest declines that did not stray too far from the performance of the S&P 500.

Internationally, foreign markets declined in the first quarter. Geopolitical uncertainty hit foreign markets early in the quarter, erasing what was moderately positive performance until that point. Emerging markets slightly lagged foreign developed markets due to a stronger U.S. dollar and rising geopolitical risks, but the underperformance was modest.

Commodities registered massively positive returns in the first quarter primarily thanks to rising geopolitical risks. Oil, wheat, natural gas, corn, and other essential commodities surged on a combination of actual production outages related to the Russia-Ukraine war (which reduced current supply) and buyers locking in supply for fear of any future production disruptions should the war continue for months or spread beyond Ukraine’s borders.

Switching to fixed income markets, bonds registered some of the worst performance in years during the first quarter with most major bond indices declining as investors exited fixed income holdings in the face of high inflation and as the Federal Reserve consistently signaled that it was going to raise interest rates faster than investors had previously expected.

In the corporate debt markets, investment-grade bonds saw materially negative returns and underperformed lower-quality but higher-yielding corporate debt, which also declined but more modestly so. This underperformance in investment-grade debt reflected the impact of rising Treasury yields, while the outperformance of high-yield corporate bonds served as a reminder of the still-positive outlook for the U.S. economy and corporate America, despite the macroeconomic headwinds of inflation, geopolitical unrest, and rising interest rates. 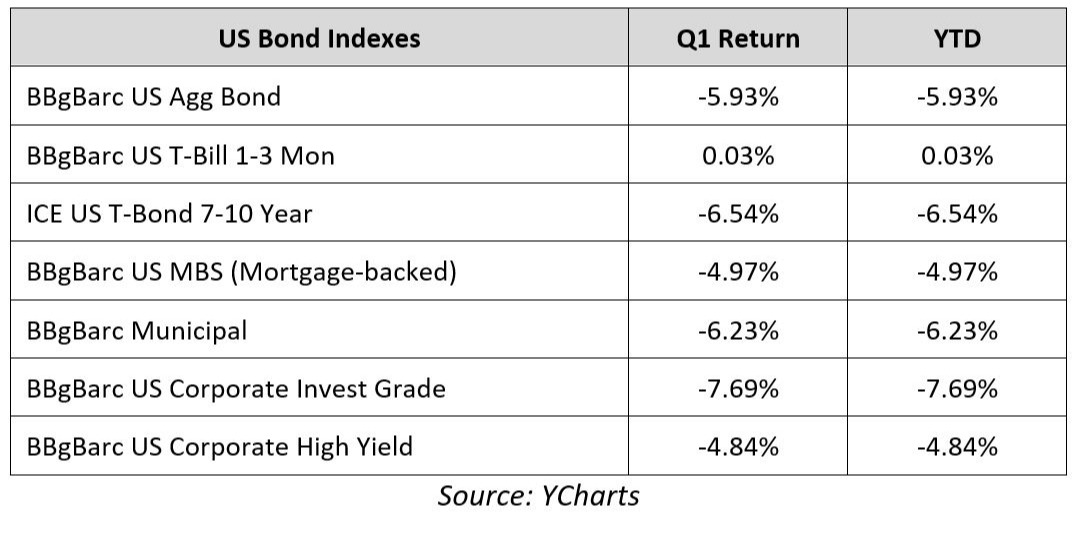 As we start a new quarter, markets are facing the most uncertainty since the pandemic, as headwinds from inflation, less-accommodative monetary policy, and geopolitics remain in place.

Inflation still sits near a 40-year high as we start the second quarter and with major commodities such as oil, wheat, corn, and natural gas surging in response to the Russia-Ukraine war, it’s unlikely that key inflation indicators like the Consumer Price Index will meaningfully decline anytime soon. Until there is a definitive peak in inflation, the Federal Reserve is likely to continue to aggressively raise interest rates, and over time, higher rates will become a drag on economic growth.

The Federal Reserve, meanwhile, has consistently warned markets that aggressive interest rate hikes are coming in the months ahead, and this quarter we expect the Fed will reveal its balance sheet reduction plan, which will detail how the Fed plans to unload the assets it acquired via the Quantitative Easing program over the past two years. If the details of this balance sheet reduction plan are more aggressive than markets expect, or the Fed commits to more rate hikes than are currently forecasted by markets, that could weigh on stocks and bonds alike.

Finally, the Russia-Ukraine war continues to rage on, and the geopolitical implications have spread beyond the battlefield, as relations between Russia and the West have hit multi-decade lows. Meanwhile, crippling economic sanctions against Russia remain in place, while commodity prices are still very elevated, and the longer those factors persist, the greater the chance we see a material slowdown in the global economy.

But while clearly there are risks to portfolios as we start the new quarter, it’s also important to note that the U.S. economy is very strong and unemployment remains historically low, and that reality is helping support asset markets. Additionally, interest rates are rising but remain far below levels where most economists forecast that they will begin to slow the economy. Finally, consumer spending, which is one of the main engines of growth for the U.S. economy, is robust, and corporate and personal balance sheets are healthy.

In sum, the outlook for markets and the economy is uncertain, and we should all expect continued volatility across asset classes in the short term. But core macroeconomic fundamentals remain very strong while U.S. corporations and the U.S. consumer are, broadly speaking, financially healthy. So, while risks remain, as they always do, there are also multiple positive factors supporting markets, and it is important to remember that a well-executed and diversified, long-term financial plan can overcome bouts of even intense volatility like we saw in the first quarter.

At Gaia Wealth Management, we understand the risks facing both the markets and the economy, and we are committed to helping you effectively navigate this challenging investment environment. Successful investing is a marathon, not a sprint, and even temporary bouts of volatility like we experienced over the past three months are unlikely to alter a diversified approach set up to meet your long-term investment goals.

Therefore, it’s critical for you to stay invested, remain patient, and stick to the plan, as we’ve worked with you to establish a unique, personal allocation target based on your financial position, risk tolerance, and investment timeline.

Rest assured that our entire team will remain dedicated to helping you successfully navigate this market environment.

Please do not hesitate to contact us with any questions, comments, or to schedule a portfolio review.